More than half (51%) of adults who were abused as children experienced domestic abuse in later life, new analysis has revealed1.

Domestic abuse includes sexual assault, non-sexual abuse and stalking by a partner or family member. The CSEW defines domestic abuse as occurring after the age of 16.

Child abuse includes psychological and physical abuse, sexual assault, and witnessing domestic abuse. A child is defined by the CSEW as a person under the age of 16.

Around one in five adults aged 16 to 59 (an estimated 6.2 million people) had experienced some form of abuse as a child, according to the Crime Survey for England and Wales (CSEW) for the year ending March 20162.

But the impact of what is often a hidden crime does not always end there.

A higher proportion of survivors of child abuse went on to experience domestic abuse in adulthood, compared with those who suffered no childhood abuse.

Survivors of all four types of child abuse were the most likely to suffer domestic abuse; 77% had experienced domestic abuse after the age of 16, compared with 40%3 who experienced one type of abuse as a child. 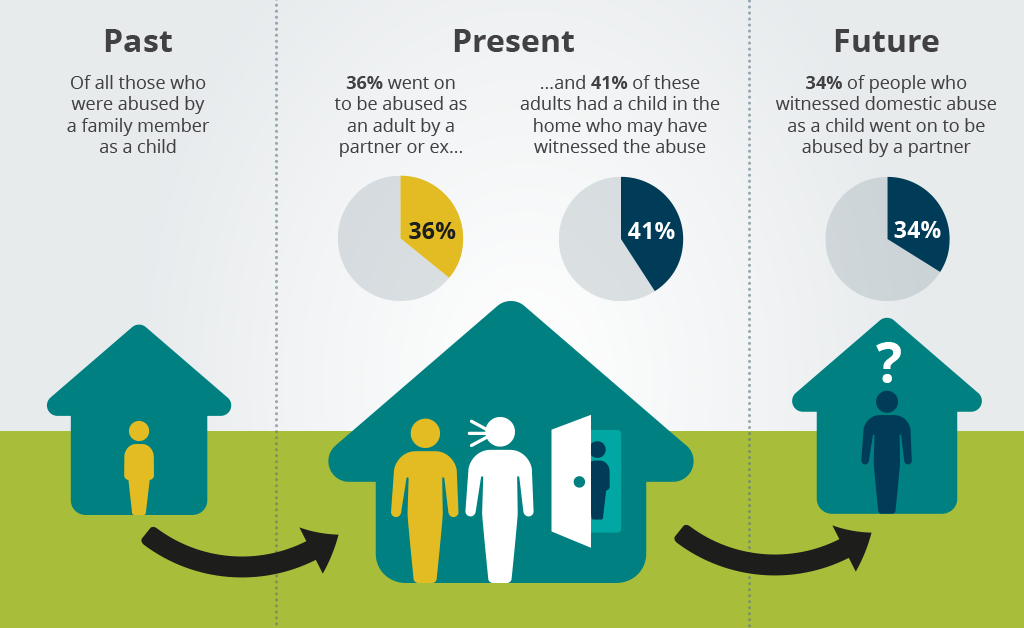 Sexual assault as an adult

Almost a third (31%) of adults who were abused as a child reported also being sexually assaulted as an adult4, compared with 7% of those who did not experience abuse as a child.

Domestic abuse in the last year

than those who had not experienced abuse as a child (12% compared with 8%).

They were also almost twice as likely to report having a long-standing illness or disability compared with those who were not abused as a child (28% compared with 15%)6.

At the same time, 78% of child abuse survivors said their health, in general, was “very good” or “good”, compared with 87% of those who did not experience abuse as a child.

Survivors of childhood abuse rated their well-being as lower than adults who did not experience abuse as a child. They were less likely to be happy, satisfied with life and feel their lives were worthwhile than those who were not abused as children.

A spokesman for child protection charity, the National Society for the Prevention of Cruelty to Children (NSPCC) said: “A child’s experience of abuse must never dictate their future, which is why we work directly with victims to help them recover and get their lives back on track.

“Although survivors may bear the scars of their experiences, this should not define who they are.

“Swift mental health support, resources for police to investigate child abusers, and a society that knows what abuse is and will step in if they suspect it can all help survivors go on to lead happy, fulfilled, lives.”

If you or someone you know is a survivor of abuse or violence, help is available from the following organisations:

Previous research has looked into the impact of Adverse Childhood Experiences (ACEs) on later life. These are stressful experiences during childhood and include abuse, neglect and growing up in a household with mental illness or alcohol or drug abuse. The research has primarily focused on the impact of these experiences on health and well-being, finding that they can lead to adopting health harming behaviours, such as smoking, and can have life-long consequences to health, for example National household survey of Adverse childhood experiences and their relationship with resilience to health-harming behaviors in England and Adverse Childhood Experiences and their impact on health-harming behaviours in the Welsh adult population.

Other research, looking at the implications of child abuse and maltreatment, has also shown similar findings. A literature review for the NSPCC , called the Costs and Consequences of Child Maltreatment found that these experiences as a child could have many different implications on the individual in later life, such as forming and maintaining relationships, mental health problems and an increased likelihood of experiencing violent treatment from an intimate partner.